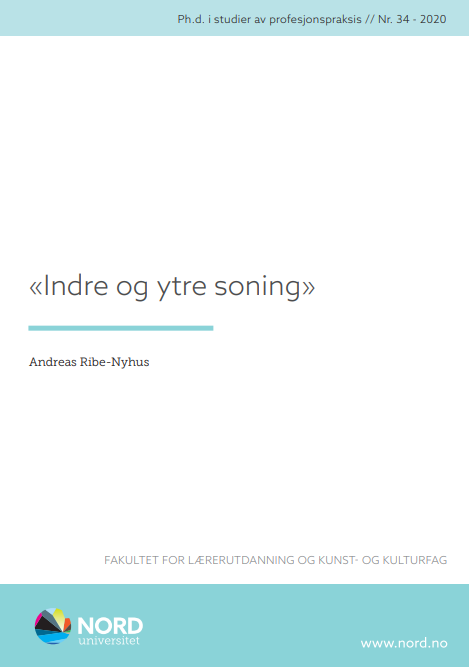 The former Norwegian prisoner Anders Ribe-Nyhus defended a Ph.D. on his exprience in prison

This thesis is a reflection and analysis of my years in prison and the action that brought my there, that I killed a man in defense of my girlfriend. The thesis is in four parts. The first part, called «the experience» is about that situation and the 5 years I was incarcerated in high security prison. This part has an almost narrative structure and is based on my prison diary that I wrote every day during those years. In this part it’s also a chapter with a critical reflection where I ask what this story is about. I focus on three themes: about my wrongdoing and regrets, about the other prisoners, and about the prison system. The first of those themes is in the next chapter, which is also about the question of gilt.

In the next part, called «the prison», I analyze deeper those two other themes. Here I compare my own experiences with different types of prison research. I analyze the «prison community» and the «community of prisoners», as two «communities» where different codes and rules apply. In the «prison community», the community of prisoners and guards, the prisoners must flatter the guards and it is only a few limited roles they can play, without being punished. That makes the prison life very repressive for the prisoner. In the «community of prisoners», the community with only prisoners, the rules are very different. Here it’s about showing the other prisoners how criminal you are, by telling stories of «criminal deeds» and then getting the other prisoner’s acceptance and recognition. The last chapters in this part discuss the question: what is a prison? I propose to understand a prison as an institution that control the prisoners needs and deprive him of possibilities to cover those needs, and then also explaining what the pain in prison is about. In Norwegian prison the needs that is deprived is mainly his social needs.

The third part of the thesis is called «the punishment» and is about the theories of justification for punishment in society. There are two main theories, the first about retribution, looking back at the act and trying to punish in just relation to it. The second is about prevention, looking forward and asks how we can prevent similar acts in the future. I propose that we understand punishment as society’s reaction to evil actions, with a basis in retributive theories. I further argue for a holism in our understanding of punishment, where we should use both preventive and retributive theories. I argue for an understanding of punishment as a reaction that should conserve our relations, instead of pushing people out of the society. In that respect I argue for what I call a relation-based version of punishment.

The last part of the thesis, called «the way» is my reflection on method, as a way I have taken and now look back at. In this part the conclusion is also included, as a short reflection on the way that lay ahead. In the chapter on method I reflect on the phenomenological-hermeneutic method that I have used through three steps: Practical reflection, where I make written text of my experience. Then critical reflection, where I reflect over the written text of the experience. And last the theoretical reflection, where the experiences are compared with research and philosophy. In the conclusion I state that high security prisons are not a form of punishment that we can give morally justification for anymore, because it causes morally deprivation instead of moral progress.

Andreas Ribe-Nyhus: Indre og ydre soning (NO | PDF | 5Mb)Download
By navigating further in the site or hiding this massage, you accept our Cookie policy and our Disclaimer